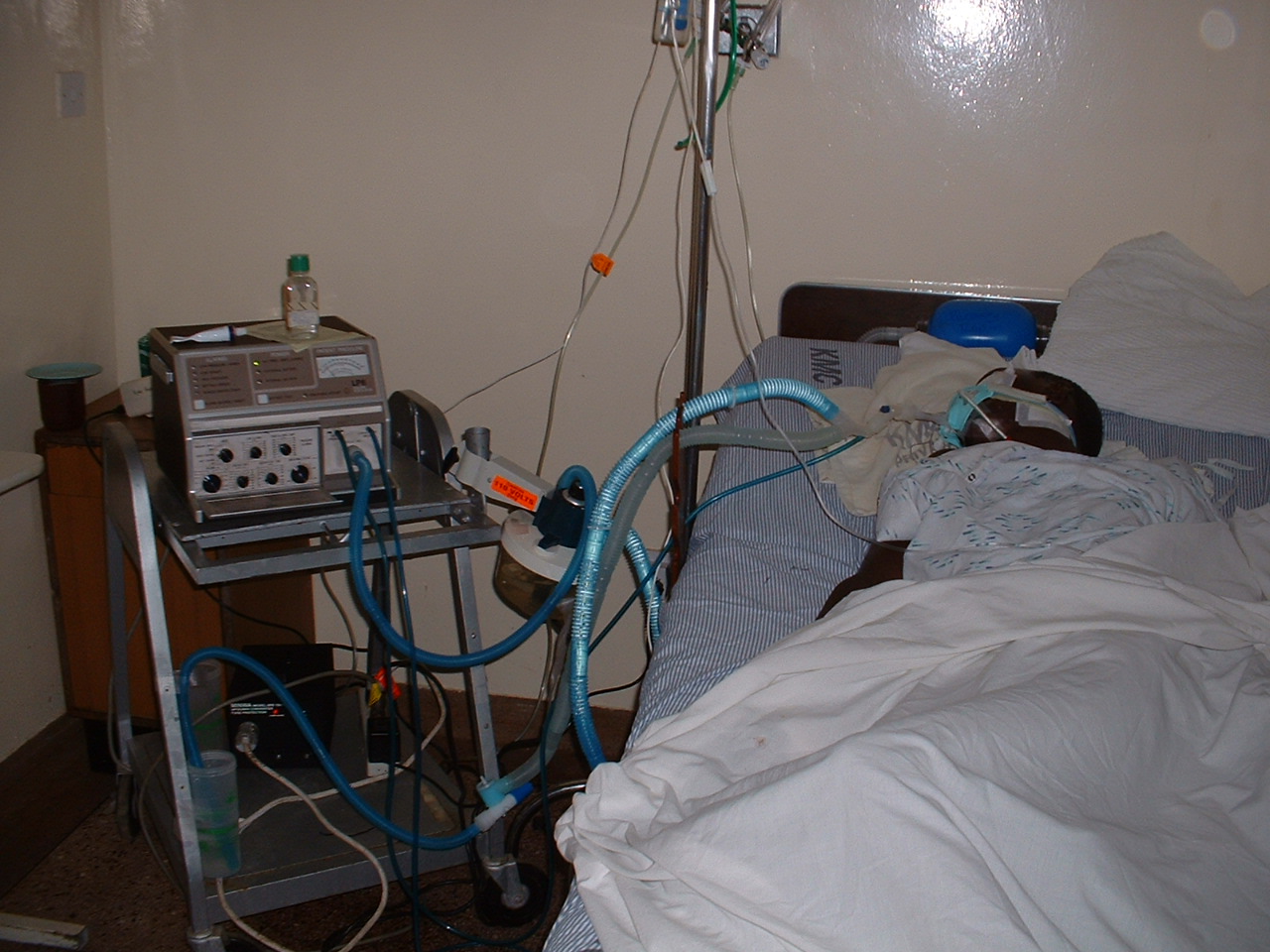 We didn’t know why the 20-year-old woman with extremely low oxygen levels had pneumonia in both her lungs. She wasn’t HIV-infected and didn’t look malnourished. Exposure to indoor air pollution — yet another life hazard for rural African women — was a possible cause.

Regardless of the reason, she required every molecule the recently repaired Maua Hospital plant could generate. A special “non-rebreather” mask (the kind with the bag you see on television shows) helped increase the concentration of oxygen delivered to her starved lungs.

Had she been admitted to the hospital the day before, she would have died — because the central oxygen concentrator wasn’t working a day prior. And a bedside unit (the kind Americans sometimes use in the home) couldn’t have provided enough flow to treat her severe case.

What saved her life was supplemental oxygen. Yet oxygen remains one of the least available “essential medicines” on the World Health Organization’s list. If African hospitals so regularly lack oxygen, how are ventilators supposed to help?

We now know that critically ill COVID-19 patients placed on ventilators have poor outcomes. But even before this discovery, ventilators were not an appropriate option for most African hospitals.

Why? Because it takes a system to ventilate patients and care for the critically ill. And those systems are too few and far between here.

A ventilator requires a stable supply of power. I will never forget when a young Malawian man with pneumonia, clearly improving while using a bedside concentrator, died one evening after the power failed. We didn’t have fuel for the main back-up generator and tried futilely to get a second generator to work. (There was a fuel crisis in the country).

A ventilator requires high-flow oxygen. Maua’s plant can care for four critically ill cases at once — leaving no oxygen for other patients. And most facilities don’t have a central oxygen plant at all.

Writing of his own experience trying to bring clean water to his ancestral home of Nigeria, Efosa Ojomo observes:

Building water wells seemed like the best and quickest way to solve the problem, but a few months after building them, each one had broken down since the communities lacked the capacity or expertise to maintain them.

I later learned there are more than 50,000 broken wells in Africa alone, and in some communities as many as 80% of donated wells are broken. Through that experience, I learned a hard lesson: even when there seems to be an urgent need, simply providing resources without considering the local context is rarely the right approach.

For healthcare systems to effectively leverage ventilators in the fight against this coronavirus they require an immense amount of resources and expertise that many African countries lack. There’ll need to be constant electricity and a consistent supply of accompanying sedatives, intravenous medicines, and intravenous pumps for ventilators to add real value. [emphasis added]

The takeaway here should not be, “Nothing can be done.” AMH has successfully helped to drill boreholes for several health facilities, for example. The key here is that the projects were located on the grounds of functional institutions. Those institutions might struggle to pay upfront infrastructure costs but have incentives and systems to maintain the equipment. No water, no service. No service, no income. Wells and boreholes require engineers and technicians. How is a rural village supposed to source an engineer, and with what resources?

In Kenya, most hospitals that do have oxygen rely on cylinders, which have a finite supply, are expensive, and must be sourced from long distances. Reuters noted that “the ministry of health implored on Twitter for hospitals to pay their bills to the company that supplies many of them with cylinders.” I’m told that the fact that over four million people in one region of the country had access to only 200 beds with (mostly cylinder) oxygen contributed to the decision by the US government to repatriate personnel.

So, once we have constant power, oxygen, vital signs monitors, an adequate supply of sedatives, and the expensive ventilators themselves, now all we need are critical care nurses and other qualified staff.

Circa 2003 I was taking call in the “high-dependency” unit at Kijabe Hospital in Kenya (a step below an ICU, although we really were providing intensive care by necessity). After a very long day, I trudged home only to be paged back to the unit. “The monitor isn’t working,” reported one of the young nurses. Very likely in her nursing school patient monitors were a rarity. I plodded back to the hospital and…turned on the monitor. Someone had inadvertently pushed the power button and didn’t know how to turn it back on.

Over time an impressive cadre of Kenyan critical care nurses arose. A long-term missionary nurse with ICU experience trained the first cohort informally. Then the hospital brought a Kenyan ICU nursing tutor from Nairobi to instruct a larger group. When the ICU was formally opened, an American intensive care nurse was on-hand to mentor. Even though private hospitals in Nairobi stole away our nurses almost as soon as Kijabe could prepare them, eventually self-sustainability was achieved.

And now? One of those first nurses started an advanced diploma in intensive care at the nursing school. An emergency and critical fellowship for pediatricians exists in partnership with universities. Kijabe hosts the largest nurse anesthesia education program in East Africa, impacting Kenya, South Sudan, the Nuba Mountains, and the Horn of Africa. Others launched a unique emergency medicine and critical care training program for physician assistants. AMH has collaborated with Kijabe to replicate these latter two programs in a neglected area of northern Kenya, where lack of access to C-sections and acute trauma care robs many lives. Another hospital sent a cohort of nurses for a several month focused course at Kijabe before launching its own ICU.

A young boy on a “non-invasive” ventilator in the Kijabe HDU, circa 2003. He had been attacked by a lion and came to the hospital in septic shock. The machine helped his labored, fast breathing. Following surgery, intravenous fluids, and antibiotics, he made a full recovery. (The machine had been a wedding gift.)

The latent human talent exists in abundance. That potential just can’t be nurtured to maturity overnight. In the US, it takes four years of medical school, three years of residency, and two years of specialty training to produce an ICU doctor. (But aren’t we glad they are on the job now!) And that talent certainly can’t be fully developed with short-sighted approaches like those highlighted by Ojomo.

“The best time to plant a tree was twenty years ago. The second-best time is now.” A Chinese proverb gets it half right, at least in this case. As donors and funders inquire about intensive care, I can only say, “The best time to have started intensive care was a decade ago. Now — as in right now to fight COVID — is too late.” We are paying the price for decades of neglect of the African community hospital.

But we can begin to prepare the systems and people to confront a broad range of health challenges, including the next epidemic, whatever that might be.

Right now, there is a lot of talk about how COVID is exposing gaps in Africa’s health systems. Afterwards, will the same interest exist? Will the political will and resources be found to tackle the hard, chronic problems? If the West African Ebola epidemic is any guide, it’s doubtful.

I only know that AMH will be here, doing our best to help mission hospitals build the systems everyone says are so lacking. On land where, a century ago, lions once roamed free, kids get their brain tumors removed, the severely premature child survives, the lame walk, and the blind see.

Dr. Jon Fielder is based in Kenya and serves as the Chief Executive of African Mission Healthcare.