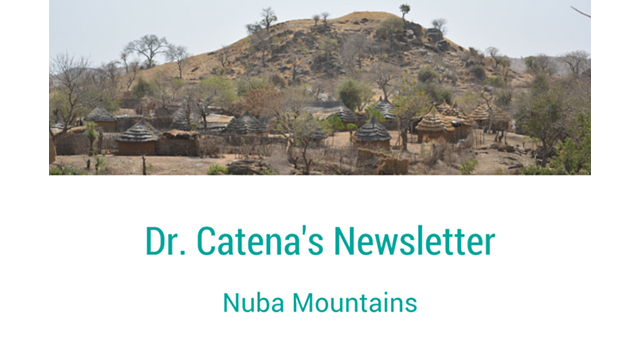 After a joyful vigil mass on Saturday night, I got up early on Easter morning for quick ward rounds before heading off to the Easter mass.

Yesterday was Easter Sunday and it was an eventful but not unusual day here in the Nuba Mountains. After a joyful vigil mass on Saturday night, I got up early on Easter morning for quick ward rounds before heading off to the Easter mass. The first patient on children’s ward was a one and a half-year-old baby with an incarcerated umbilical hernia which would require emergency surgery. We called the operating room team while we continued on the rounds. We then took the baby to the operating room, reduced the hernia and repaired the defect.

The anesthesia was expertly performed by our staff, Isaac Kodo who has just finished an 18-month course in anesthesia at Kijabe Mission Hospital (Kenya). The anesthesia staff at Kijabe has done us a tremendous service by agreeing to train (now three) of our staff in anesthesia. The course is supported by African Mission Healthcare Foundation and is a wonderful example of how mission hospitals can use their resources to help each other.

After finishing the operation and rounds, I arrived characteristically late to the Easter celebration which was well underway. Throughout the 2 hours plus mass, an Antonov bomber from the Sudan Air Force circled overhead causing the priest to stop and pause at several points during his homily. We all nervously continued celebrating the resurrection of our Lord. After the mass, as we were enjoying a little goat stew, the Antonov continued circling overhead. I went to visit a friend but was quickly summoned by one of our nurses to hurry back to the hospital as there were several wounded who’d just been brought in and some dignitaries who wanted to meet with me. After we treated that group of wounded, another group was brought in and was rapidly taken care of. We expected more of the same to come but luckily that was it for the day.

We considered ourselves lucky as the Sudan Air Force had resumed night bombing. Last week we were awakened at 1 AM and 5 AM on two separate early mornings by the sound of the Antonov and the concussive sound of bombs exploding nearby. A few weeks ago a one and a half-year-old baby had his leg blown off by a bomb dropped from the Antonov. His mother had her hip shattered into pieces but survived. Another male member of the family was killed. We had to amputate the baby’s leg but he’s recovering well and has already been fitted for a prosthetic leg by our visiting orthopedic technicians from Uganda.

As the only referral hospital and only surgical hospital in the Nuba Mountains region, we need trained and motivated staff in order to carry on with the work. To this end, we need money to train the staff and pay them a living wage.

On behalf of the staff here at the Mother of Mercy Hospital, I’d like to give my sincere thanks to everyone who has contributed to our efforts here.

Addendum: Just after finishing this letter, three patients who had been hit with a bomb dropped from the Antonov were brought to us. They were two young boys – ages 6 and 12 and an elderly woman of about 70 years. These people live on a mountain top far from any military installation yet they are still victims of the government’s indiscriminate bombing campaign. Thank you for helping us take care of these innocent victims.

Dr. Catena is getting married!
Amidst all this difficult news we should not miss a chance to celebrate with Dr. Tom, who will marry next month in the Nuba Mountains. His bride-to-be is from the Nuba Mountains and works as a nurse at the hospital. Congratulations, Tom!

Gidel Mother of Mercy Hospital is operated by the Diocese of El Obeid. African Mission Healthcare Foundation (registered 501(c)3) provides financial support to the hospital. Contributions may be made online or by check to AMHF, PO Box 2783, Westerville, OH, Attn: Dr. Catena’s work.