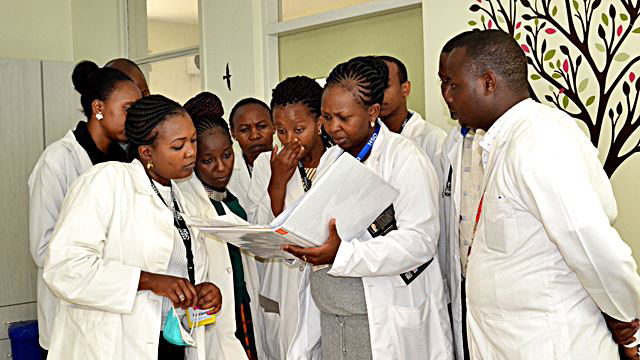 Tabitha Wambugu is a clinical officer (physician assistant) working with Lea Toto, a program caring for HIV-infected children and orphans in the Nairobi slum of Kariobangi. Lea Toto asked for AMHF’s help in training their staff in the latest developments in HIV medicine.

Some adolescents were failing their original antiretroviral cocktail and were no longer keeping the HIV virus under control. Tabitha noted delays in identifying the problem and switching kids to new, more effective combinations.

“When we identified such patients and needed to switch the drugs, only one person was allowed to do the switch and who was not always available,” observed Tabitha. The lack of trained providers meant that some patients were kept on sub-optimal HIV medication for longer, risking illness and drug resistance.

Tabitha set a goal to form an interdisciplinary team that would regularly discuss at-risk adolescents. Following the training and after discussion with the facilitators, she developed an action plan to improve the care of these clients.

Eight months after the training, the interdisciplinary team meetings are now taking place monthly. The group discusses vulnerable patients and makes a plan to improve their care. The viral suppression rate, which measures the optimal use of HIV drugs, has improved from 70% to 80%.

“The training has really made a difference in our service provision among the orphans who are living with HIV. We are grateful and wish the training team all the best as they mentor other health care workers,” says Tabitha.