Stories Of Illness And Recovery From Kenya, Part 2 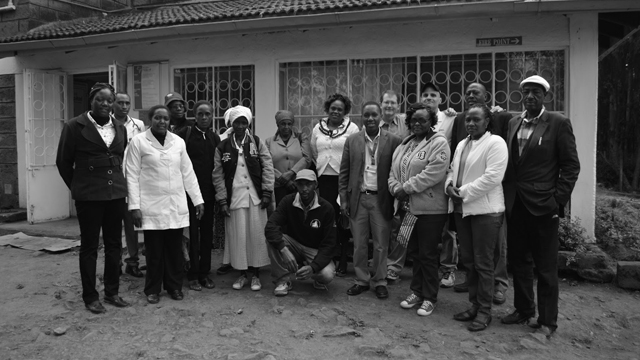 Like the group introduced in the previous post, this cohort of patients received support from Mark Gerson through Kijabe Hospital to buy life-saving antiretrovirals, years before the drugs were available freely under the US government’s President’s Emergency Plan for AIDS Relief (PEPFAR).

On a sunny afternoon in the sleepy village of Marira, Kenya, having traversed the muddy, rocky, obstacle course of a road, I arrived prepared for another full afternoon. Unprepared, however, was I for what came next. Blench, a longtime community health worker at Marira Clinic, greeted me. She seemed flustered and quickly swept me along to meet the patients. They were a little disappointed at having waited so long. Despite the delay, not a single person had left. They had waited fourteen years for the chance to say thank you, so another few hours was little in comparison.

When Jon and Mark arrived, all tension melted away. While I had been privileged to conduct individual interviews with a handful of patients, the real treat was to see the patients’ interactions with Jon and Mark. An array of emotions was evident, ranging from the pain revived by memories from more than a dozen years ago, to the soaring happiness of renewed vitality. Elbows brushing against one another, we all piled into a tiny room to listen to each patient share a journey.

At the time Paul received the diagnosis of HIV he was already deep in the throes of meningitis. Having been told that diligent treatment could improve his condition, Paul began to build hope again. By the time he began treatment, however, irreversible damage had already been done. His condition had become so severe that at times he lied in his bed unconscious and relied on his wife to administer medicines. As he spoke about his wife, a shy smile crept upon his face and a seriousness entered his eyes. “I am lucky because she stayed by my side through everything. She could have left, but she didn’t. I could not have survived this without her.” Through our translator, Paul tried to describe the mental condition he suffers on the account of his severe illness. Not knowing the proper term, he talks of “losing his mind” and becoming “psychotic.” Once a month Paul receives an injection to quell the effects but after three weeks those effects wear off and he begins to lose himself all over again. Additionally, he has no vision in his right eye. Despite these challenges, Paul elects to describe himself as “mostly happy,” because he knows he did not die like so many others before him. He is grateful to be able to work again and to be with his wife.

When I asked Esther how she felt about her journey with HIV, she answered, “shocked.” When she received her diagnosis in 2003 she had effectively accepted her imminent death. She had no idea that she would soon be attending a support group and be receiving appropriate drugs and counseling. What she did know was that her husband took his own life upon receiving a diagnosis of HIV. When news of her status reached the community, they ostracized Esther and spread a rumor that she was dead. With her children grown and moved out of the family home, Esther was completely alone. She could not have anticipated the powerful community she would find among caring physicians and empathetic HIV survivors. They became her new family and lent their support every step of the way. Today she describes herself as “confident” and “strong.”

Deborah, mother of five, lowers her eyes as she tells me, “I could not raise my kids as I wanted to.” I asked her if her husband helped with the children or around the house. Her eyes sank even lower and she took a long, heavy pause before replying. A decade ago when she was diagnosed with HIV her husband divorced her immediately and left her with the children. Alone, without work, weak with HIV, Deborah struggled to make sense out of life. Without the free clinics and drugs, Deborah says she could not have pushed past these most difficult years. Tears well as she thanks God and her care team. Her strength to keep living was borne out of the clinics she attended every week. Deborah tells me that her eldest daughter is now 18. She has worries as most mothers do, but she tells me she invests time to educate her daughter about sex. Deborah never wants to see her daughters suffer as she did.

As each patient took turns speaking a strong sense of community filled the room. Patients nodded in solidarity as the hardships of others resonated with their own.